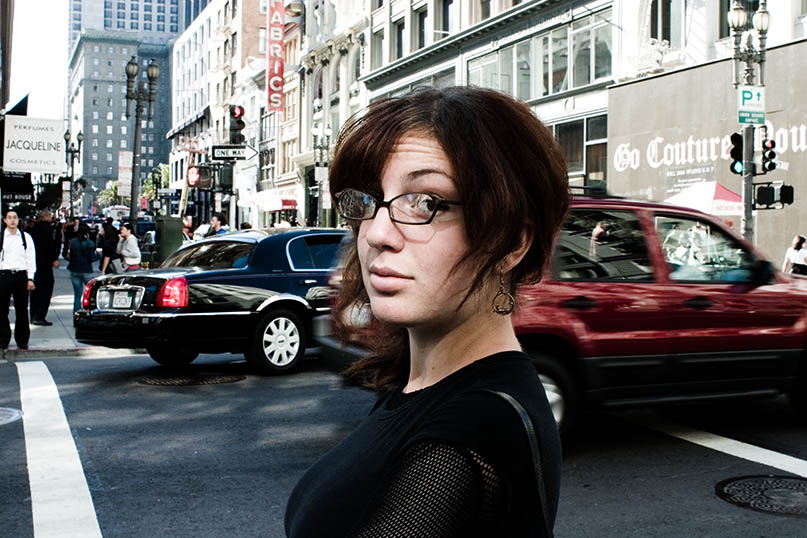 A couple of weeks ago I was reading Michael David Murphy’s 2point8 and started clicking the “previous entry” lin ks— eventually, over the course of a few hours, I worked my way back through the entire history of the blog, mostly in a straight line backwards but with a few Memento-like sidebars of reversed reverse time. Regardless of direction the time was well-spent (later I tried the same thing with this blog, and frankly Botzilla doesn’t bear extended reading nearly as well, with its many random discursions and distracted tone. You do what you can).

Since Michael reviews many books in his blog I thought I’d dig some of them up. In my current large bedside (and bedtop!) stack of readables, then, are two streetphoto books from the 2point8 book club: Rosalind Solomon’s Chapalingas and Gary Stochl’s On City Streets. I’ve had to wait for Gus Powell’s The Company of Strangers, though Powell’s website and his gallery on in-public.com provide a lot of material for “casual reading” of his work.

Chapalingas has been a difficult book for me to approach, starting with its size — seven pounds, 460+ oversized pages. Enough material for a number of smaller books, and to a degree I feel that what Alec Soth blogged recently — that a gallery show, even a great one, may become just a blur when there are more than about sixty images — applies similarly to books. Chapalingas is so sprawling that it requires repeated return viewing, at some pace of the viewer that’s seperate from the book’s own sequence of pages. Perhaps Solomon realized this in her arrangements of photos: chapters connected loosely by themes like “Holds: Grasps, Ties, Clutches, Grips, Bars” or “Heads: Hats, Hair, Hoods” that can be more easily consumed as mini-books by themselves.

Solomon is clearly a product of her interactions as a student of Lisette Model, and like other Model prodigies (most famously Dianne Arbus), she has set herself that classic task that is so simple, yet so infuriatingly and breaktakingly difficult: “I wanted to take portraits of people that showed them as real human beings, no matter where they were or what their background was.”

Indira Ghandi or a random couple in Burger King, department store Santa or a Peruvian funeral. So many photos that push hard at these same themes of photographic specificity, and with the sort of surrealist eye that only the hyper-realism of photography can really reflect without seeming cartoonish. As with many of the best photographs (imo), very few of these would make good paintings — not only because of their immediacy and the natural appeal that photographs have as evidence of a privileged view, but also (despite David Hockey’s own recent assertions) because I really believe that no other medium could be as expressive in its presentation (a characteristic that expalins the large size of this book, too — the photographs suffer when printed poorly, or small — or reproduced on the web).

Solomon’s prodigious output, stretching over decades, is sadly her own worst enemy here. It’s easy to start turning pages too quickly after a few too many wonderful shots. Better to come back later, and open instead to a random page as if this were some other book on another day.

Stochl’s On City Streets, like Chapalingas, collects photographs made over the decades from the 1960s until now. Yet his results, like his small camera, are more handily grasped: about fifty pictures in an easily-held volume. Stochl’s story has already been well-told by others. His photographs, made in Chacago, seem a natural extension of the style of the Chicago School’s formalism, particularly in his repeated use of some graphic conceits from which he draws repeated surprises, making good use of the Leica’s suddenness and the particular natures of black, white, and still photography.

Unlike Solomon, Stochl has no apparent direct connection with the people who appear in his photographs. At most their glances into his camera are curious or at the cusp of accusatory. Instead, like Winogrand, Stochl is involved in surprising arrangements of figures, of fragments of figures, and of the tones of the figure against the background. Unlike Winogrand, if I understand them correctly, Stochl seems to be more aware and deliberate in setting himself up for particular locations and awaiting a photograph, as opposed to Winogrand’s more ambulatory through-the-crowd approach. Yet both depend on surprise and a quick hand.

Both Chapalingas and On City Streets represent a slice of the output of an artist who spent many years working at focused ideas and with a unity of technique. Both seem to have used one film and one camera for the entire period: Stochl his 35mm, Solomon her 6x6. It’s hard to imagine a photographer embarking on a similar task today. Even photographers who have already been working on prolonged projects are finding themselves being rushed into a changing era of technological churn, and many have been collecting stockpiles of their materials against the days when those materials may suddenly disappear even while being used, as Marshall Oils and Kodak Azo paper have vanished in recent months (indeed, all Kodak B&W paper).

What [digital] camera of today can one imagine using steadily until 2046? I’m not saying it’s impossible. But I’d like to know. New cameras are beautiful. The pictures possible can be truly striking in their detail and flexibility. But I wonder what might be lost when artists are unable to stay the course with a consistent program. Or: perhaps this constant technical rootlessness is a more honest expression of the accelerating and changing environment in which we all now find ourselves embedded.

The newest entry at 2point8 is this one: “How To : No Flash Corner,” where Michael reveals his favorite no-flash spot. To my surprise it wasn’t on Market Street where I expected, but a corner that might be the one I used for the photograph above, just a couple of weeks ago (or maybe it was a block away…). Go figure.

Also in my bookstack is a non-photography book, Seminal Graphics, a collection of older graphics-research papers including “An Image Sythesizer” by Ken Perlin. That’s a no-flash Ken on the left, alongside our mutual buddy Mark V. 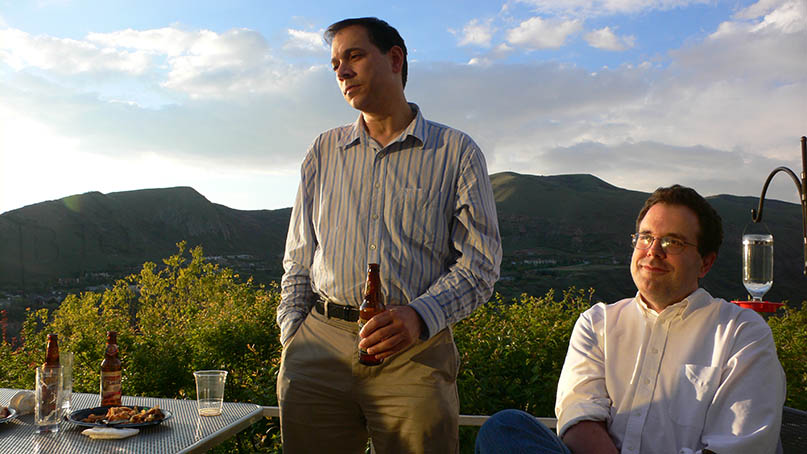