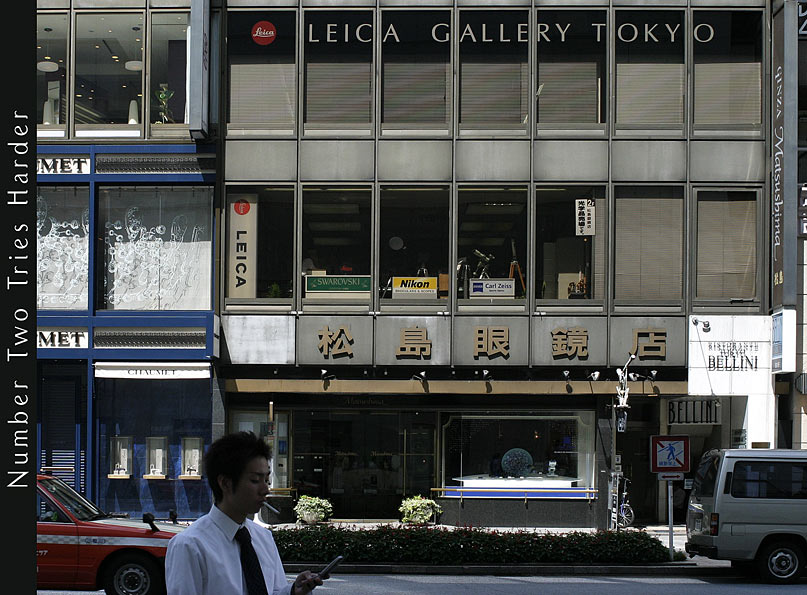 With three hours to kill between afternoon presentations at Kogakuin University, I took a three-block walk, first across the street to the Mitsui Building, where I failed to find either the the Pentax Forum Gallery or Epson’s epSite. Then around the corner past Subaru to the Nikon Salon and Salon 21bis, tucked-away on the 28th floor of the Shinjuku L Tower.

As expected, the galleries were tucked behind a bright and shiny general product showroom and the service departments. I was somewhat leery, expecting to see the sorts of pix that photo marketeers know amateurs want to make with their gear: bright balloons, clowns and children, sunsets and vividly exotic birds. I was very happy to discover that I was totally wrong, and the the galleries at Nikon were full of good photos. The 21bis show was particularly good, [LANDSCAPER] by Shunsuke Tamura.

Better yet, the shows changed rapidly — I could come back the next evening to see two completely new sets.

Thus both discouraged by my poor navigation and yet encouraged by what I’d found at Nikon, I set off the next morning to visit the concentration of photo-industry-sponsored galleries in Ginza: Canon, Contax, another Nikon gallery, Leica, Fuji, and Kodak, where I knew the 50 Years of Tri-X Show contained, among many others, a couple of Moriyama and Araki prints.

This time, for the most part, I got exactly what I had been expecting in the first place. Canon was full of big colorfully empty travel photos, though two tall prints at the back of the gallery, depicting ice and stones, were strikingly different and evoked old-style Chinese painting. The show at Nikon Ginza was of wildlife and wild landscapes, big and colorful and again predictable. Contax: “Rock,” containing big prints of Mount Zion sunsets and sunrises. Fuji also had a show of mountainscapes, big and colorful and apparently all shot by a camera club (many members present, too). Leica, poised next to the new Ginza Apple Store (essentially a very straight copy of the American ones — just like Apple stores I’ve seen in Korea and China — even down to the English-language signage), stuck to the knitting as well, with a collection of black-and-white Tyrolian farmers by Georg Mayr (made, one assumes, with a Leica M). At least the Kodak show was worth the long walk in a circle through Ginza’s tony shopping districts.

After this walk I went on to see Dirk and Kurt at lunch in Akasaka, and post-noodles we visited Hit-On rental darkrooms before heading on for more wandering and my return to the hotel around 5PM. Now apprehensive, I decided against finding the new Konica Minolta space or searching again for Pentax and Epson.

If I hurried, I could still catch the new shows at Nikon Shinjuku and even walk over to Photographer’s Gallery, which I knew regularly exhibited Japanese street photography. I was not disappointed by the show “SM Tabloid,” and managed to pick up a couple of new books too before wandering off into the evening rain.

The Nikon galleries? On one side, Yoko Oyama’s Silver Moon — stylish, thoughtful. In bis21, an in-depth documentary collection on Japanese rural retirees (the photographer’s parents?), a much better rendition of emotional B&W journalism than the safe stuff found over at Leica.