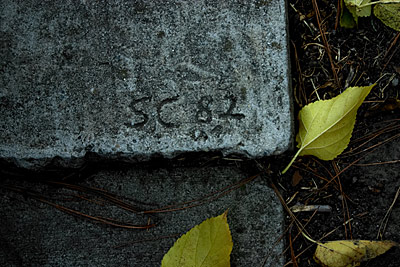 I was reading a recent ArtForum article about moblog photos, and the reviewer hit upon a key word: inessential. Photos that run counter to the notion of “a perfect flower,” they are just: “a flower.”

They don’t contend to any special uniqueness or meaningful significance. They’re just tonight’s dinner, or the cat. They’re even less momentous than old snapshots — at least old snapshots were made on someone’s birthday or on the family’s Grand Canyon roadtrip. Moblog photos tend to be somewhere even less worthy of inspection, between snapshots and the dull gray eye of a security camera. And there’s a lot of them.

After seeing Luis’s quote of Robert Frank from the 1958 U.S. Camera Annual, a quote I’ve seen often kicked around, I thought I’d go find the original. I found one in the San Jose library. The due-date stamps showed that it had last been checked out in 1986. And there in the middle was Frank, first with a brief writeup by Walker Evans, then a pretty hefty slice of the then-yet-to-be-published The Americans (one shot rudely clipped-out of the book — wish I knew which one), and then Frank himself. His comments are brief, just a page.

Frank wrote in his Guggenheim application of his desire… “To produce an authentic contemporary document, the visual impact should be such as will nullify explanation…“ The first half surely fits the moblog aesthetic, but what of the second?

I have a genuine distrust and “mefiance” toward all group activities. Mass production of uninspired photo journalism and photography without thought becomes anonymous merchandise. The air becomes infect with the “smell” of photography. If the photographer wants to be an artist, his thoughts cannot be developed overnight at the corner drug store.

I am not a pessimist, but looking at a contemporary picture magazine makes it difficult for me to speak about the advancement of photography, since photography today is accepted without question, and is also presumed to be understood by all — even children. I feel that only the integrity of the individual photographer can raise its level.

Frank's still out there, wandering New York or the wilds of eastern Canada. Wonder if he has a celphone cam.