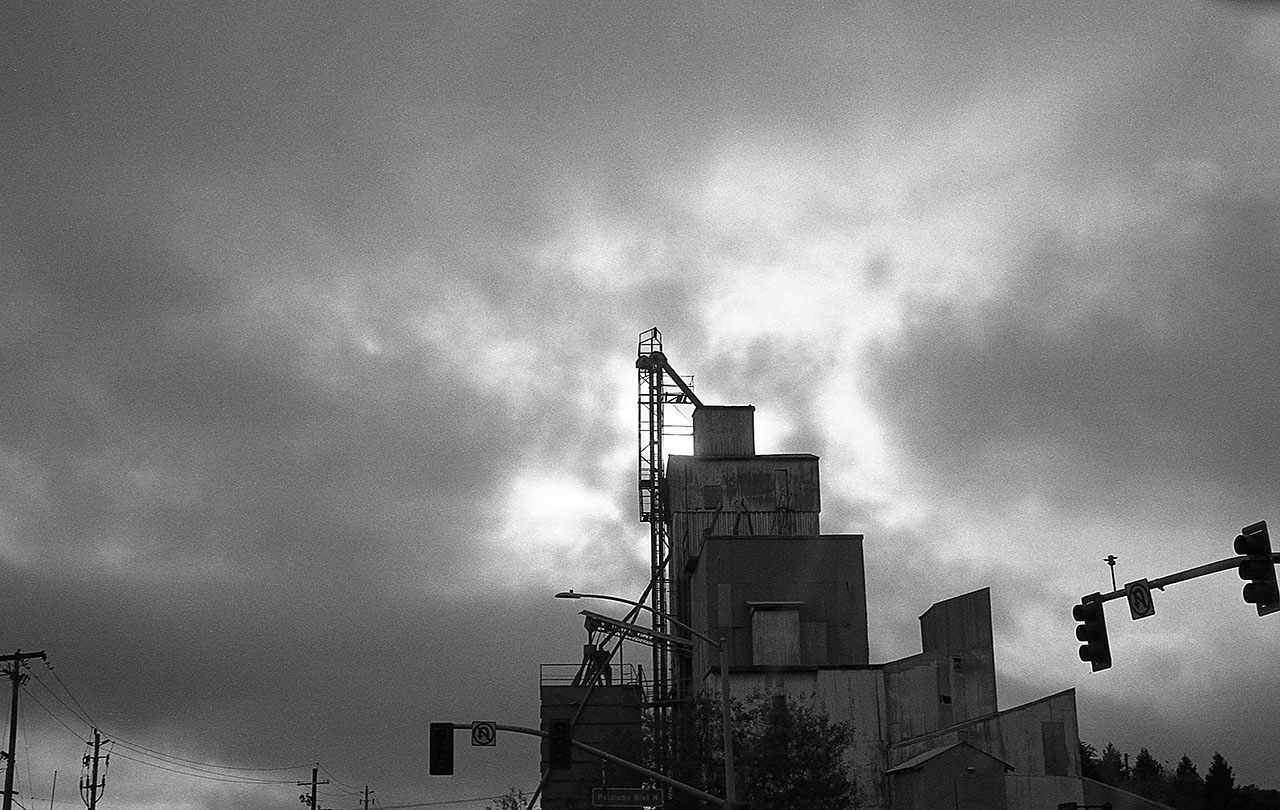 I had a lone 35mm roll of Rollei Ortho film, and some Rodinal. The combination should result in some of the sharpest negatives available – may as well find out!

Rollei usually recommends another developer, but they do list Rodinal 1+50 at 10 minutes inside the box, so: that’s what I used. This also gave me a chance to do a quick shake of the new TTArtisans 50mm ƒ/1.4 ASPH lens. I’ll write more about that later on, but in the mean time here are just a couple of frames from the Rollei negatives, along with 100% scanner crops, and further down, a comparison (for the film, not the lens) shot with a Nikkor 55mm micro-Nikkor (on a Nikon, of course), and finallly a quick comparison to a recent shot made with the X-Pro2 & the Fuji 16mm ƒ/1.4 (a 24mm-equivalent lens).

The closeup below is from the full-frame photo above. The camera was a Leitz/Minolta CL.

At 4800 dpi, Epson’s scan resolution for a 35mm frame is nearly identical with that of the Fuji X-Pro2 sensor: about 6000x4000. Rollei claims the film can resolve up to 330 lines per mm, or over 8000 lines per inch. Well above the scanner capability. And far above the resolution of any lens for a 35mm camera, at least one made during the film era – even the best ones will peak around 140 lpmm. Lower for SLR lenses.

Resolution’s not the whole story for either a film or a lens, but looking at this 100% crop I learned a couple of things about the film, about my scanner, and about this lens (I’ll write more about the lens in another post – including how it feels on both a regular-sized M body and the diminutive Leitz Minolta CL).

This second shot was made with the 28mm ƒ/2.8 M-Rokkor. That lens was made for the CLE, so I keep around an extra 28mm shoe-mounted viewfinder (the CL lacks a 28mm brightline, while the CLE has one – but the CLE lacks the CL’s 50mm lines…). In practice, the full view of the CL’s finder is pretty close to 28mm already, though if I’m prefocused or zone focused it’s a lot faster to just use the top-mounted finder or even just wing it, since I’ve developed a personal “internal viewfinder” too.

There are a lot of tonal gradients that I can appreciate in this image, and I was very pleased to discover some really small details in the far background. Again, the film is recording at the limit of the scanner and the lens. And yes, I would have done some dodge-and-burn but not for the purposes of today. This is presented “as scanned.”

Fuji doesn’t make this film any more. I bought in bulk, Way Back When, and about 15 rolls remain. I’ve been exposing it at around ISO 200 or 400, depending more on my mood than the demands of the scene. To match the Rollei film, I’ve also processed this roll in Rodinal 1+50, just like the Rollei film, this time for 13 minutes.

The shot below doesn’t have a lot of sharp detail, but the edges it does have show off this 1960s Nikon lens pretty well, and the gradients reveal some of the grainy character in this film.

At web resolution, the old slow fast film still manages pretty well! At 100% the scan shows a lot more difference, as you might expect. But not as much, in truth, as I had expected.

A surprise, when reviewing on the computer: the strong grain is apparent even in the tiny thumbnail views that Photoshop presents showing “recent files” – while the thumbnails for the Rollei shots still look pretty clean.

At this late stage for film cameras, no one should be surprised that the digital Fuji has detail to rival even Rollei Ortho 25. What surprised me is by how much it excels! See for yourself. This is a six-year old X-Pro with a 24mm equivalent lens at ISO 400.

This is just a record of my personal testing for my own use. Reminders to myself and a few confirmations of things I thought I knew and have now verified with experience:

More generally: shooting film and shooting digital are increasingly different. The Fuji X-cameras earn all their love, they’re super. On most every technical measure, they win. The charm of film and film processes is not in those metrics.