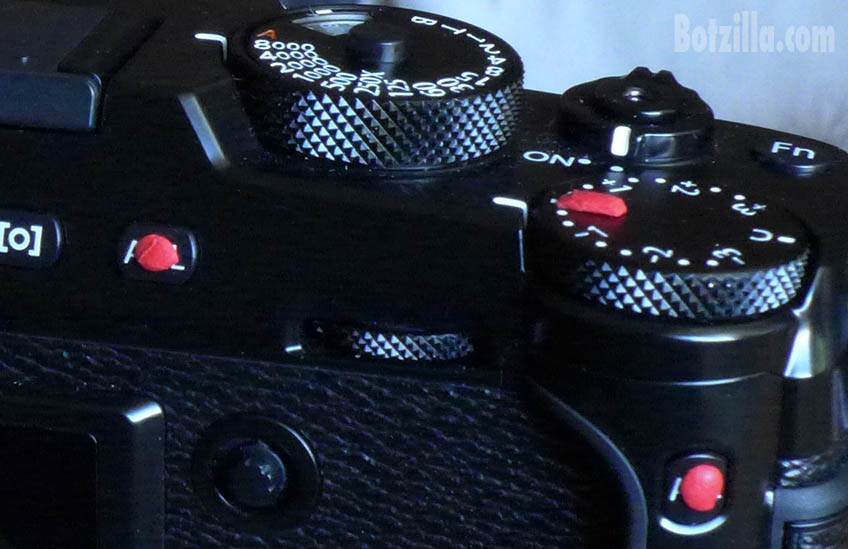 Why don’t more industrial designers design for fingertips? They seem to understand grip, but sensation… less.

Over the past couple of years I’ve taken to hacking the mechanical controls of my cameras (and a few other items) with Sugru, a quick-curing material that’s a bit like a cross between modeling clay and rubber. The idea is simple: provide tactile landmarks for my fingers, so that I can use the camera’s controls without needing to look at them – either because it’s raised to my eye, or even if the camera is out of sight in my bag or jacket pocket, preparing for the next shot.

In this photo, the red blobs are bits of Sugru. In the past I’ve used black. The color is pretty unimportant, what matters is the material feel against your finger.

Sugru is strong but the nubs usually wear down after a few months of daily use. They’re easily replaced in about three minutes.

If you’re reading this on a computer, run your fingers along the center row of keys. On most American-style QWERTY keyboards you’ll feel tiny “nubs” on the “F” and “J” keys. Even if you don’t think about them, your brain does use that extra information to help align and coordinate touch-typing (You may find a bump on the “5” key if you have a numeric keyboard, too). They’re nearly ubiquitous now, though the patent on the idea (for keyboards) was only filed by June E Botich in 2002.

The same idea works great for cameras or other devices with multiple hard-to-distinguish buttons. On my Fuji-X cameras, I put a dot of rubber on the AF and AE lock buttons, and one near the “zero” of the exposure-compensation dial.

Not only does it help me navigate individual cameras, but it also helps me when I switch cameras, say from the X-Pro2 to X-T1 or X100T. The button layouts might be different, but my thumb and fingers know the feel of matching controls.

For other cameras with fewer mechanical controls, like the little Lumixes, I just add a dot on the main dial to indicate the “P” setting. Always, the goal is to let my hand do as much of the navigation as possible, rather than burden my eye, which should be watching for The Picture.