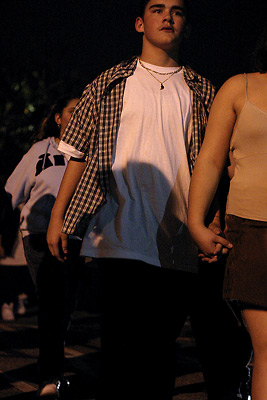 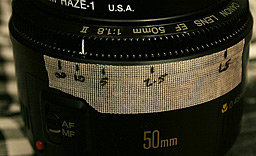 An awkward feature of that particular Canon EOS lens is its complete lack of distance scales. The 50mm ƒ/1.4 has them, but at a much, much higher cost. So I just wrote some on the side of my lens.

First I marked one of the knurled edges on the focus ring with an office white-out marker (model paint might have been better, but I didn’t feel like digging that stuff out of the garage). Then I cut a scrap of cloth first-aid tape (which I also use for framing and matting) to the right length, with a notch for the MF/AF switch. Finally, I did some quick measurements in my kitchen, focused to the appropriate spots, and made marks on the tape with a ball-point pen for infinity, 10, 5, 2.5, and 1.5 feet. Close enough for wandering around shooting from the hip.

One thing that’s missing is depth-of-field indicators. By my estimation, ƒ/22 markers would be quite close together — about three notches, or a little bit less on each side than the distance between the infinity and 10-foot marks.

(PS: This later entry gives more detail on DoF for digital cameras. I realized I was slightly wrong — the markers would need to be closer-together)