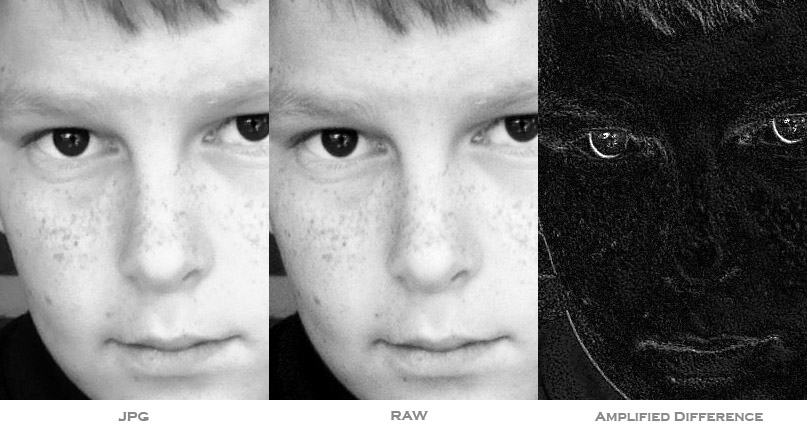 Why the heck not? A lot of the time, I happen to like the picture I see on the LCD. So I made myself an Adobe Camera RAW preset that, as best as I could eyeball, would match the tonal range of the LCD on the LX1.

It was a somewhat subjective process, not entirely perfectly scientific, but simple enough. I shot some Kodak grayscale charts, played them back on the camera LCD while simultaneously loading them in Adode Camera Raw, adjusting the corresponding RAW/DNG conversion on my laptop under Photoshop CS3. I could see where the blacks petered-out, and the overall relationships in tones between neighboring patches. So patch 1 was full-on, the grays died out arounf patch 14, the values were a little boosted around patch 5, etc. It made the picture that I liked.

Once I’d made such a preset fro RAW files, I also made a corresponding adjustment curve that would alter camera JPGs to also more-or-less match the results I was getting from ACR. It’s easy to make such a curve with a three-layer photoshop file (I like RAW but some situations — particularly very fast repeat shooting — still require JPEG for this little bufferless compact camera).

To make a curve that matches a JPEG to the ACR result: First, open the JPEG. Next, add a Curves layer and close the Curves dialog (we’ll come back to it). Now, open the RAW file in another window, Select-all, and paste it on top of the JPEG (which will make a new layer). Set the blend mode of this new layer to “Difference.”

Now all you need to do is open that curves layer again and adjust it until the visible differences between mictures are the absolute minimum. If the picture is black, then both the bottom (JPEG) and top (RAW) layers are a match.

The less-than-wonderful surprise I got was: the pictures don’t align. At first I thought it was sharpening, but actually they just don’t line up. They are two or three pixels misaligned, apparently at a 45-degree angle. In fact it’s not even an integer number of pixels — the pic above (a 100% blowup of the previous blog entry) shows the closes I could get, and shifting it in the opposite direction simply moves the various contour-outlines from one side of the face to the other.

The second surprise was that, despite the fact that these curves reduce the tonal range (that is, they step on constrast), the RAW pic holds detail quite a bit better than the JPEG. I’d expected that since the JPEG had more range than my desired pic, I wouldn’t make much difference. But it does. The higher fidelity of RAW still matters even on a low-fidelity images.

As a minor aside, we noticed last night that the LX2 makes a guest appearance in Spiderman 3 — in a scene where a photographer loses his SLR, he wastes no time in dragging an LX2 out of his jacket pocket & just keeps on shooting…. (though I’d never recommend carrying the camera in your pocket with the lens and flash both already extended).