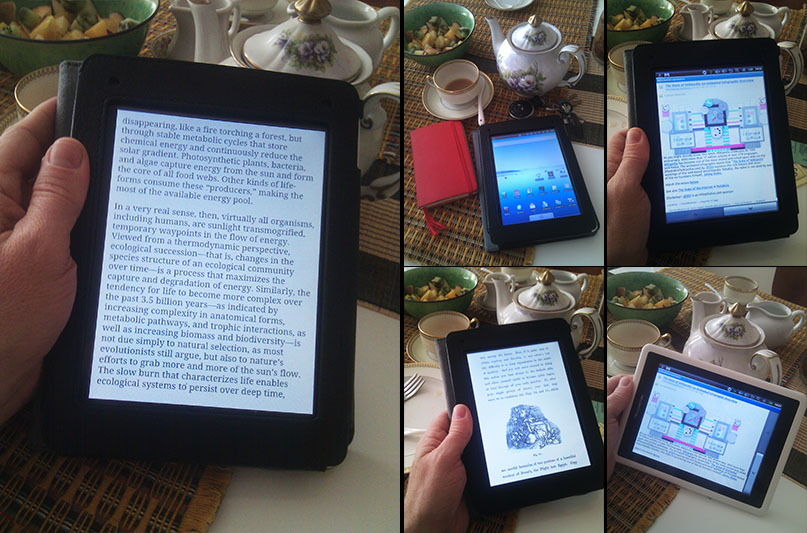 The pictures show a recent bargain toy -- a 7-inch Pandigital Novel eReader (aka "PDN," or "WPDN" to specify the white variant), re-flashed to expose its Android underpinnings and updated to Android 2.1 "Eclair." I managed to pick this one up during a recent clearance at the nearby chain store Kohl's for a tidy $59 (apparently, a few folks even managed to get a $20-off deal -- an Android tablet for $40!). Even at the more-usual price of $199 the Novel is no iPad, but at that price you could by three or four of them (or at the discount, a dozen or more!) for the price of a single iPad (Addendum: Apparently they sold 440,000 PDN's in 2010). So here's a quick review of my experience thus far:

Pandigital are known as much for their digital picture frames as for their e-Readers, and the Novel kind of feels less like a slowed-down computer and more like a turbocharged picture frame. This suits its designated purpose: as a full-color eReader. Not a game machine, or a media center, though in fact it's quite capable of playing YouTube videos or being a music player if the mood should strike you to use it that way. But really the CPU wasn't designed for rapid-fire screen updates. It's a device built around a slower, simpler, long-attention-span sort of experience.

I've got several different devices on hand for comparison, including current iPhone, iPad, a couple of new and old Android phones, and various other small computers, MIDs, readers, and so forth. Given this environment, these are the things that stand out about the Novel:

Resistive Screen
A good resistive screen, but it works best with the back-of-the-fingernail strokes rather than just the finger tips used on capacitive screens like the Nexus One or iPhone. This can throw you when moving back and forth between different devices.
Slow
Mentioned this before, but: it's okay. What I don't try to do is cram every possible use case into this device -- I am not expecting tons of animated bells and whistles or HD television or anything of that sort from it. This is one device among several, so I can let it just focus on what it does well. For my uses (more later), it's fine.
No Bluetooth
No Camera
No Phone or 3G/4G Connection
No GPS
If I thought it was really important for me to record my face and location while typing my Engadget responses from the beach, I suppose these omissions would be truly upsetting. Happily, the simple wi-fi connection covers any of the locations where I'm actually likely to be using the PDN, and I can always turn on tethering from my phone if I'm desperate to update my apps while tooling along through traffic on US 101.
No Pentalobular Screws
Easy open, and easy tweak, too -- I doubled the internal memory by simply sliding open the case and swapping a hidden microSD card.
Long Battery Life
I've accidentally left mine on all day and it's still solid later on. It's a charge-daily device, though, unlike, say a Sony E-Ink reader (which can last for many days -- again, designed for intermittent bursts of activity, rather than continuous on-screen spinning and sparkling).
Standard SD Card Slot
The PDN can accept SD cards up to 32GB, though I haven't yet filled the free 4GB card I picked up at MicroCenter (There's also the hidden internal slot mentioned above, for microSD).
USB Port
The device has one, but it's really only useful for communication with other computers via ADB (Android Debug Bridge)
The Case
Not many choices compared to iPad, but I found this book-style folder at Bed Bath and Beyond, also on sale (The PDN is very much not the sort of device you'll find in usual computer stores -- everything has come from the Housewares Dept so far!).
Having the case makes a huge difference in the comfort level (one of the pix above shows it without the case for comparison). It's much easier to hold and I don't worry about banging-up the screen. This cover compares somewhat to the base cover for the smaller and lighter (but less capable & monochrome) Sony PRS-300 E-Ink reader.
Size
The PDN is smaller and thicker than an iPad (which makes it feel heavy and dense, even though overall it's a bit lighter). I prefer this size, it suits my hand better, without being too small to read at a comfortable distance while reclining on the sofa (unlike the Sony, which needs the font size cranked up at that distance).

So what's it good for?

Principally, it's good for its chartered design tasks: reading eBooks and light web browsing. For these, it's excellent. By stripping-away the default Pandigital/Barnes&Noble skin (re-flashing doesn't delete these features, but simply makes them companion apps within the Android Home screen), the full range of Android apps can be seen and tried. I've found that the combination of wi-fi and Google books, Aldiko, & Kindle apps, along with Google Reader and the Skyfire browser, makes it more capable that any other reader save high-end tablets like the iPad or Galaxy Tab.