Iz has been recently reading parts of Seth Godin's Purple Cow, which reminded me of another later Godin book, All Marketers Are Liars. Godin includes along the way a chart kind of like the one below, which he asserts represents the "traditional" value curve associated with industrial products: 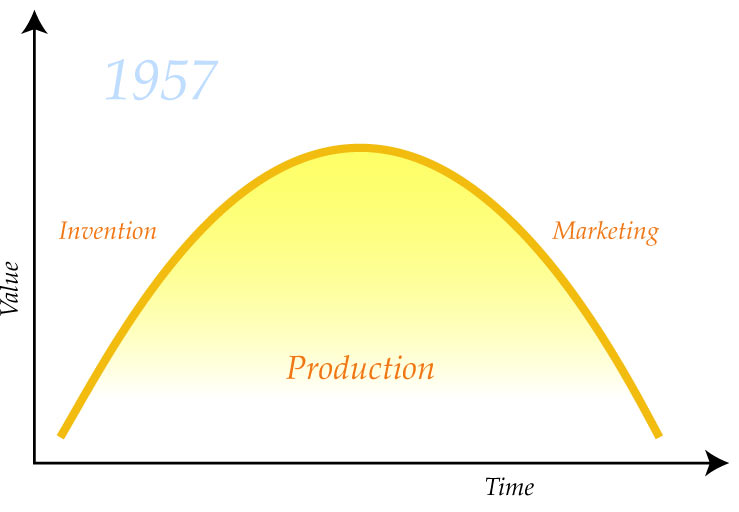 That is, get an idea, make lots of it, and marketing, as long as it manages its basic functions, will have a secondary effect compared to good manufacturing and distribution skills.

He follows it with this chart, to represent the modern condition: 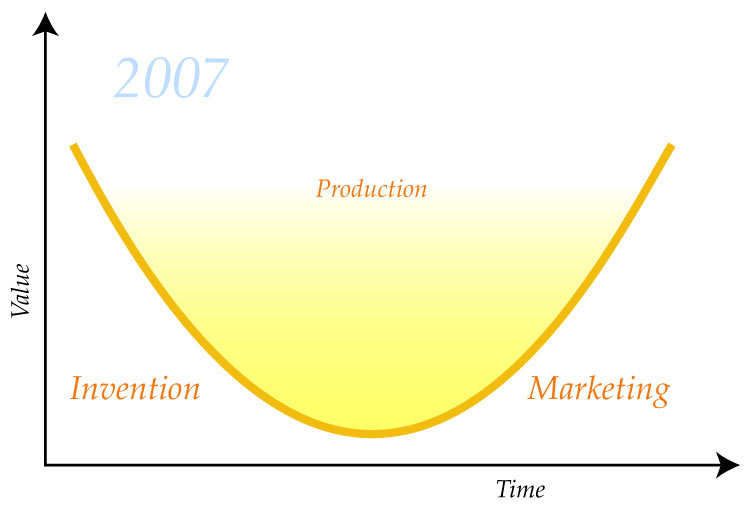 If production is computerized, or transplanted to a remote factory in Vietnam (Nike) or perhaps to the lowest external bidder (most fabless electronics companies, like NVIDIA), then — while production isn't entirely unimportant* — the real big ways to get value from industry are via two mechanisms:

In this respect, business seems to be following the Duchamp model, where art production is truly secondary to Big Ideas and Big Hype. What's interesting to me to consider about this is the notion that this has become so fundamentally a part of the entire culture, applying not just to the gallery but to everything: cars, glassware, TV shows, games, celphones, camping gear.

If this is so, what are the ramifications for image-makers, or any other sort of art-maker, living in such a society? In this era where photographers might not even have a camera (e.g., Nikki Lee), where Jeff Koons can hire-up a staff to make his ballooon critters, where singers perform in sync to quantized playbacks of hired session players, and even Garfield get drawn by assistants — is there still a role for virtuoso execution in the arts, save in the service of someone else's ideas? When and how might skillful hands make a comeback?

Our hands have had just as long and illustrious evolutionary history as our brains. As someone said: "without the eye, there are no good pictures. But without the hand, there are no pictures at all." Is the hand on a final decline, or just a momentary setback as it finds some new and ever-human outlet?

Update 4 March 2007: Michael Wolf (previously mentioend here) has gone on one of my personal dream vacations and come back with the pictures to prove it.

* This is the kind of assertion that drives the Peter Drucker crowd crazy. They claim that manufacturing is as important as ever, just that the form it takes changes due to changes in technology, transport, and communications. Drucker loves lambasting anyone who thinks that they've managed to rewrite the rules of business. I'm generally in agreement with him on this, in that there's a sort of "conservation of energy" in markets — money still has to come from some sort of economic activity at its roots — Godin's abstraction is still a worthwhile story if only because he (and many others) seem to believe it.

Comments on "Slighting the Hand"