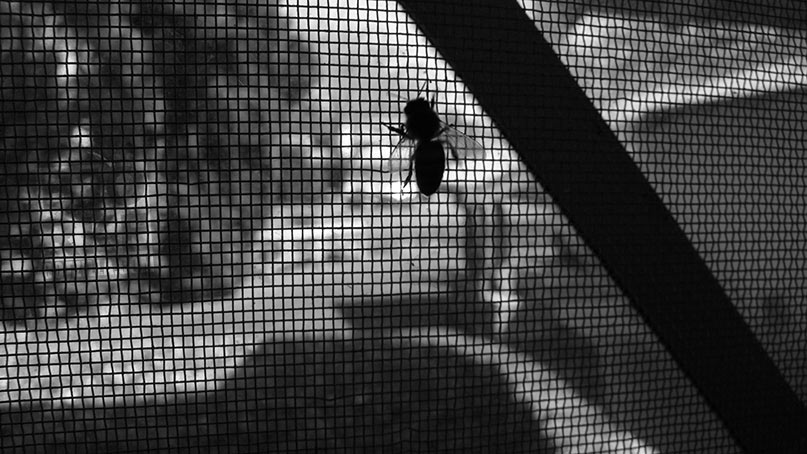 So I'm in my family room, busy reviewing Sketch Proposals for Siggraph 2006, and hear a buzz at the window. "Dang it," I think, "more flies from a couple of days ago," when a door was left open for hours. I ignore the buzz, but when I take a review break I go to the window to find it's not a fly, but a bee.

With two other bees. Great.

I get the fly swatter, dispatch the bees, but as I'm putting the swatter away I see another bee on the living room picture window. I walk over there, and see he's got friends. Seven friends. Wak Wak wak with the swatter, but there's still a faint hum... I turn, lean over to hear it faintly coming from the living room fireplace just as another bee descends out of the chimney and into the room.

Oh boy! Bees nesting in the house! So I make the obvious anti-Santa move — start a fire in the fireplace. Smoke 'em out. A small fire, with the goal to make more smoke than flame. It seems to have worked — haven't seen a bee for the rest of the day. But I'm uncertain of just what will become of their nest. There was no smoke backup, so the chimney's not entirely clogged, but I expect there's something or another up there.

Anyone know a decent chimneysweep?

I'd call Sully and Muldur from the FBI. This has X-File's written all over it. :)