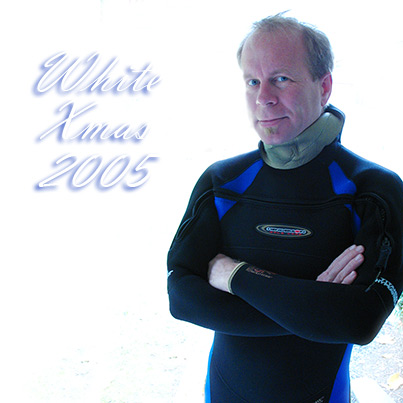 (Warning — multiple rewrites)
Thanks Rebecca for shooting the wee album cover pic on on the right, she did it this morning with her new swanky Powershot. I'm wearing my new Christmas Henderson.

It is blue. It is 7mm thick. It is darned warm and sweaty after twenty minutes or so.

Maybe I should have recolored the background in Photoshop & tagged it as a blue Christmas? This weekend, holiday or no, is finding me simultaneously both delighted and melacholy and it's all related tangentially to a conversation I had a few nights ago about what does and does not show up in people's blogs....

As with so may things around here, it revolves around my return to the world of being unambiguously single. And what I've been doing about it — namely, getting out more, developing my internal emotional life, my external social life, and dating. And it seems to me that this last part is almost always the stumbling point for personal bloggers, because it straddles privacy issues that envelop not just the blogger but other people. It's one thing to be open about your own life (or at least to pretent to be). But what about hers? Or what if you want to be open but you don't want her to read it? What are the limits of full disclosure, of any disclosure, or coming off as a genuine, thoughtful person versus some vampiric jerk? Maybe online life isn't really as open as we'd like to think it is and can be.

I have no doubt that others have written on this issue, and done it better than I. I don't know them, so I'll just keep going here. Having a few hints tossed my way couldn't hurt.

I suppose there are a few tactics that could be deployed. One would be to ignore it. But if it's consuming all your free cycles anyway, then it's not as if it won't have an effect on the blog.

Another is to just write everything. Expect some people to have a real problem with that. I suppose I could wear an "I'm blogging this" tee-shirt constantly, but that sounds like a tough obstacle to intimacy to be dragging around.

I could write in acronyms and initials, but that feels either twee or impersonal. Or both. Or use elliptical reference like Min-Jung occasionally does, with names for people that sometimes I think I recognize but sometimes I wonder if there aren't multiple real people being folded into the prose persona. We are all writing personal fictions every day, no? We make up stories and we try to fit our lives into them.

Or maybe it doesn't matter because I almost never seem to go out with bloggers anyway — though the address for this site is on my little introduction cards (If you've come here from reading one: hi).

Whatever. Right this second I'm up late fretting over a series of unreturned phone calls even though I've gotten surprise calls from five or six other women during the same three or four days. Every one of them interesting and interested. I've had my kids with me and all our time and gifts have been great. What the hell is my problem, anyway?

No doubt a host of armchair would-be shrinks would be glad to tell me that I'm afraid of commitment, or maybe afraid of lack of commitment, or excessively flinchy about the slightest hint of rejection, or too concerned with being cool, or polite; that I'm excessively buffered, or too needy of contact, or just trying to prove something to my guy friends, or afraid of letting anyone ever really get close even though it's what I most crave. Yeah, yeah. You're all correct. I'm getting better, I promise. My own actions & feelings still annoy the crap out of me, however *. It would be easier to not care. And more boring.

I feel a bit like I'm on my own Underground Railroad, moving through the hands of strangers from location to location, hopeful for some yet-unseen destination. Have to just keep moving north.

* Annoys me at the moment, that is — amuses me later. Miyazaki-san once said that in his mind humans were very silly creatures. And since he was one too, it allowed him to love them all — and himself as well.

Hi again. Your friend from Palace here. Spending some time being a voyeur and browsing my friend's blogs. And not working! Yah!

I gave my daughter "He's just not that into you" after a breakup w/ someone she thought potentially meaningful. I bet it's a good read for men as well. (dunno) Or maybe they have a male version of it. Anyway... it talks about not sacrificing your self esteem in pursuit of a relationship with someone that doesnt just naturally flow with you without heart wrenching confusion, anxiety, and constantly wondering what they might be thinking. How you should just let go of those people and center on who you are & etc. Let things that just happen well for you happen. Sounds like a good book and she loved it. The title sounds "cold" ... but I think not allowing ourselves to be diverted from our own "center" saves us from hurt down the road.

I believe that we are all like those little exercise squeezy things for your hands.... they come in all shapes and colors. I have one that is cow (from Gateway). You can squeeze the heck out of them and they are very pliant, but the entire time they under stress and pushing/needing to return to their original shape. Same with us. If we fail to stay w/in the framework of who we are, we can smoosh ourselves into a relationship that doesnt fit .. but we all know the stress of that situation and most often the ultimate outcome. So I say you are pretty cool the way you are and just stay centered. Who knows.

Wanted to comment on Pam's comment above (Hi, Pam!)... I flipped through said book a couple of times, and even though I originally thought it was silly and cliched and *koff* mainstream, I found myself compelled by some of the content. It helped me figure stuff out as I was venturing back into dating, too. Some of the stuff that I read became good guidelines that I continue to use.

You could also make the posts private, like LJ's "friendslocked" or blogs with password protected posts like Courtney did for a while. Although I'm not single per se, I do make use of the former.

Not sure what to say about the fretting other than what Pam said, because I'm pretty sure it's all about self-esteem.