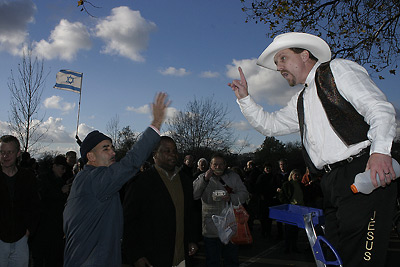 The very day I left London last week for parts more Nordic, George W. Bush was arriving. A good or bad thing, depending on your perspective. Personally, I'd have liked to witness the public fracas, but was glad to be away from it as well. The paranoia was evident everywhere — just taking a quick snapshot of the American flag decorations along the Mall a few blocks away from Buckingham Palace was enough to attract a pair of quick-stepping constables (who had been sitting in a nearby parked van, watching the street), wanting to know what I was up to.

No surprise that Dubya didn't spend time for any further European touring — it seems unlikely that he'd be welcome anywhere (if you consider the public reception he got in the U.K. to be "welcoming"). At each of my stops last week, I was told the same thing by the locals, repeatedly and unprompted: we like America, we like Americans, you are very nice, but that idiot George Bush is the biggest menace to the world we've ever seen....

It's hard not to hear not-so-faint echoes of The Melian Debate in the goings-on at the U.N. that led to the U.S. invasion of Iraq. The crux of that ancient debate revolves around legitimation of authority — some historians have argued that the whole of western democratic history is built upon a string of crises over this issue.

Osama bin-Laden paints himself in shades of pre-destined greatness — though it may all be a show for his supporters, it's hard not to think that Osama himself believes the hype. He may not be questioned, because his will has been chosen by Allah — anyone who is less closely-aligned with Allah is unimportant and may be freely dispatched, as we have seen occur in recent days to muslims in Turkey and Saudi Arabia. You are less worthy than us, and thus our car bombs perform God's will.

Grotesquely, Dubya has awakened some time ago to the same calling. Without Osama, it's hard to imagine Bush Jr as much more than a bumbling bureaucrat, albeit one whose campaign promises of "compassionate conservatism" had, before September 11th, yielded only conservatism with little sight of compassion.

After September 11th, the New Bush really appeared — not just the career politico, whose position as president merely filled-in the empty spots on his resumé. The New Bush, in response to Evil, is a politico chosen by God for Great Tasks. Mysterious ways indeed — Bush the Younger could now see that as son of the president he truly was imbued with the Divine Right of Kings, and that his faith in the Righteousness of his causes would always see them through to a positive end, without interference from the public, those un-American rabble over in Congress, or facts.

Forged evidence? Lack of WMDs? Really of little concern to those whose actions are driven by faith in unseen invisible string-pullers. For both Osama and Dubya, they can blithely convince themselves that they hold the moral high ground no matter how many innocents are pulverised for the sake of distant alien gods.