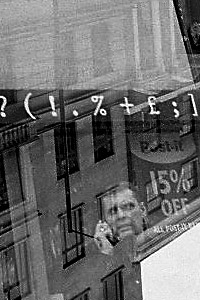 Almost Monday and time for another Streetphoto Salon. This week I actually had a photo at the ready, shot just a day or two before the announced theme: Reflection.

I must admit to feeling a bit awkward, having approached the theme in what looks like a straightforward, literal manner. Still this one does contain a bit of the layering of images and images of images that I seem to like these days, not far from the "palindrome of indirectness" I made for John B's Shell Game.

Honestly, the photo isn't entirely made of reflections. It's a multiple exposure of different reflections. No intrusive Photoshopping — it's all there on the negative — but not as it appears at first glance.

And no, it's not the photo on the right. Surprising myself, it's yet another color shot. You'd think this ambiguity schtick would always lends itself to black and white....

Tip of the week: Yevgeny Mokhorev