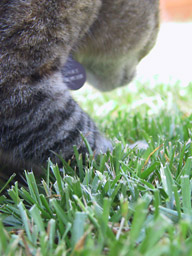 So it's 10AM yesterday morning and Courtney calls me to the window to see the backyard — the wildflowers that she'd cast as seeds last year have burst up into glorious bloom in the past week or two; the red blossoms, lit by the morning sun, were brilliant and striking.

We were discussing plans for the future of the yard when she notices that in the dark shadow of the house there's a juvenile squirrell, laying prostrate by the sidewalk. A little present from the cat, I suppose. Then she realizes that he's still breathing, and I see his paw twitch. There's a scrap of plastic bag nearby — I flash that the squirrell has eaten plastic and is choking to death.

I grab garden gloves and a shoe box and head outdoors. The kids have by now gotten interested in both the flowers and the "baby" squirrell and are both at the window, noses to the glass. Courtney is calling the wildlife center vet.

As I reach the squirrell I see that I was wrong about the plastic — my initial assessment was the right one. He sees me, but can't run — the cat has mauled the little guy, injured his legs so he can't flee. I scoop him into the box and he attacks the cardboard, chomping at it and screaming with all his might as he flops around on tiny stumps, probably worsening his injuries and smearing squirrell blood around the white lining of the shoe box. At the sound of his screams the cat suddenly appears atop the fence, wanting to defend her prize. Too bad kitty — the box is shut, brought to the car, and Courtney heads off across town to the vet. The kids, needless to say, are horrified.