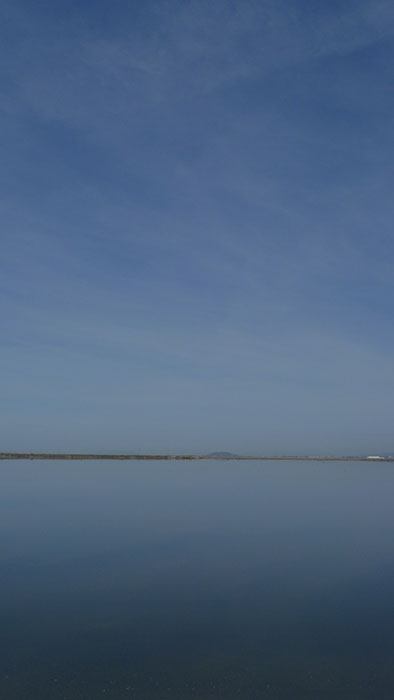 This morning I decided to go for a bike ride. Dragged out a map, looked at some of my favorite recent destinations for riding that were at about what I felt was an appropriate distance for the amount of time I had; then drew a circle roughly around my location to fit their range. I noticed that they all tended to cluster to the north and west, to Palo Alto, Los Altos, and the hills near them.

There’s an old photographer’s maxim: if the view is interesting in a particular direction, there’s a good chance that the view will be interesting in the opposite direction, too. This is one of those little guidelines that encourage the thing I most like about the process of photography, and that I like most about cycling: it demands that you pay attention.

So I chose a different route, and a path less traveled, which has made all the difference.

The photograph at right was made along a path that I hesitated before – gravel, long, no easy turning back. Little sign of popularity, not even a guarantee that I’d not get to the far side and reach some impasse that would send me back the way I’d come.

Five minutes along, and the path was now just a dry berm, rising from water on both sides. No one about, no sound but the roll of tires on dry mud. To my left, a gull came alongside, and another, and then more to the right, and all around, at eye level and skimming the still, sky-colored water below, criss-crossing alongside of me before taking a group arc off towards better fishing.

I’d never felt more like a cycle ride is a kind of flying.

Five minutes on, I was startled by a flight of swifts that whooshed perpendicularly across my front wheel, the beat of their wings the only sound followed quickly by my own amazed intake of breath as they shot off to the east.

Five minutes more and I was pacing alongside a great egret for nearly a block, able to study the strokes of his wings, to hear his call and watch how he seemed to gently communicate his presence to the other birds along the path, before he accelerated ahead, then landed on the trail, watching me until I had caught up, at which point he departed back the way he’d come.

During this I’d seen only three other people, though I was within sight of the homes and offices of tens of thousands. I passed one more, an older lady gently cranking along on a mountain bike, and as I started to loop back to shore I was following another bird, a crow I thought – after a while he pinioned 180 degrres and shot past me, again at eye level – a red-tailed hawk.

Five minutes more and I was in traffic, negotiating my way over highway 237, dodging pickup trucks and VTA trains. It was all good riding, but only one part of it touched the sky.