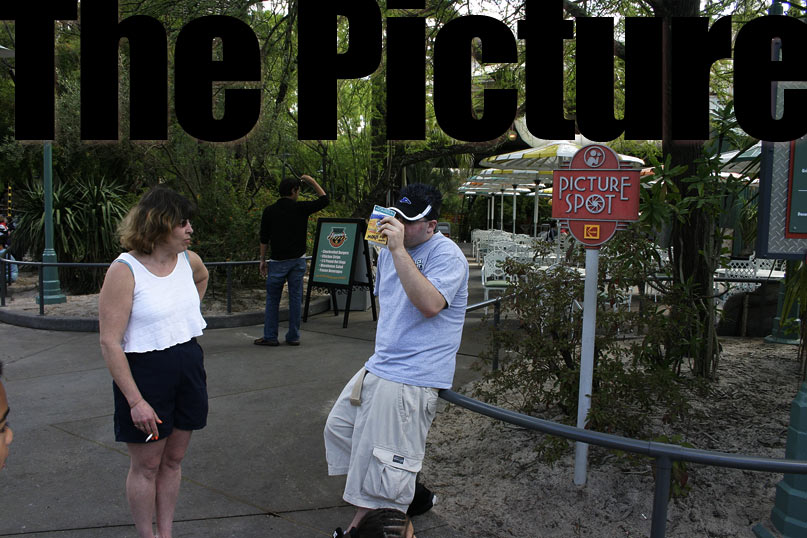 A pair of children run headlong across my view, and their keeper shouts after them: “kids, you stop that! Can’t you see the man is taking The Picture?”

I glance at him and gently shake my head with a smile: no problem. Another tip of the head to let him know the rest of the family can proceed, they’ve done no harm, even as the klaxons are sounding furiously in my head: Kevin you idiot, you’ve been sucked into taking The Picture again. I look at the shot I was setting up: late cerulean sky, distant shops, their lights reflected on the lake, a row of matching beach chairs. Balanced, placid. In a few seconds a canopied ferry will appear below the bridge. A speaker hidden in a rock nearby plays an instrumental medley of songs from The Lion King. It’s all been laid out carefully for me, which is just the point. It’s ready-made. The lake itself was sculpted by a design team. It’s beautiful, but it’s not really my picture. It’s The(ir) Picture.

That’s the nature of Disneyworld — it’s all The Picture, the pre-planned, the obvious, the expected. This isn’t to say it might not be beautiful, entertaining, or enjoyable. It’s what you pay for when you get your Ultimate Park Hopper pass, when you register at the Disney resorts. It is everywhere colorful, clean, fresh-faced, friendly, and yes, very fun. There are no phone booths on Main Street USA, much less newspapers. Like nowhere else on the planet, in Disneyworld the random, unpredictable and sometimes unpleasant nature of the outside public world is banished. Even the long, sweaty queue snaking out of The Haunted Mansion is politely obscured by a shrub-covered berm.

Wherever you travel in the Realworld, there is also likely to be The Picture — that is, the photo that 95% of the visitors will return carrying, albeit with the addition of their relatives standing in from of it: Pier 39, la Tour Eiffel, The Gates of Graceland, Mardi Gras dancers in drag. If you haven’t time or a camera, you can always find The Picture quickly in the local postcard vendors’ racks — and beautifully realized it will be, often with a tinge of golden twilight or a bikini-clad woman who is likely to look a lot nicer dressed that way than your Aunt Audrey would have.

My usual policy, when travelling or otherwise, used to be to studiously avoid The Picture. Later, I decided that this was a poor choice — The Picture is always there while I’m trying to shoot, its siren song of temptation just out of frame. Now, when I see The Picture I’m usually quick to take it, to rob it of its allure, to psychologically kill it so that I can (hopefully) move on to something else, more subtle and closer to my personal perceptions.

Disneyworld overwhelms such a strategy. The Picture is everywhere. Before we left, I was counselled by Conrad to return with photos of “All the dusty crummy corners that Mickey doesn’t want you to see.” Guess what? There are none. Along the International Walk at Epcot alone, there are perhaps dozens of Kodak “Picture Spot” markers (Courtney has been collecting them). Sorry Rad, but it’s all surface, all visible, all predictably un-crummy.

The changeable part is what’s not owned by Disney: the park guests. The mix is different from “real” streets or malls, but the crush of it is surprising. So many people, and yet so little time to shoot the throngs of happily tired parents and exhilarated, tugging kids — even as two of mine are yanking at my shirttails, urging me in the direction of the nearest collectables shop.