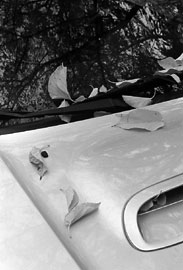 Okay, so if I’m so hot on digital imaging, why do I still lunk-around a film-based camera? What? No color?

I get asked this regularly by people in the offline world. It’s usually a lead-in to a recommendation that I buy a digital camera, often tied to a specific recommendation to get one just like theirs, which they recently purchased and like a lot. They’re usually surprised when I say that I spent almost a year toting around a digital camera all day most every day, that I have a digital photo enthusiast site, and that after that experience I dug-out the old 1950’s style gear, expanded my 35mm equipment, and have been quite pleased with the results of that choice. I still use the digicam at times, but mostly it stays home. I waver at moments, but usually have no desire to grab at the latest generation of DSLRs.

How can this jibe with my day-to-day work, daily pushing the envelope of useful computer imaging tools for games and movies? How can I be supervising imagery on films like Final Fantasy and simultaneously be such a Luddite (partial quick answer: I’m not a Luddite)?

I ask myself this regularly, and have decided that it’s all about the “C” word.

The “C” word is Control.

Back when I was in school it’s the same reason I gave for my interest in computer graphics, when asked about it by my review committee at CalArts, where my official focus was not on animation but live-action filmmaking and theatre (there was no CG curriculum at that point). I said that I liked the idea of controlling every last pixel in the frame, and felt that the level of control CG promised was greater than that of movies — that the computer would eventually become the ultimate movie-making tool (this was right around the time of the widely-panned and widely-hailed Tron).

And it’s true. CG has become the dominant means of exacting image control in films. Every last frame of any new movie you see is likely as not to have been at least digitally color-graded before you see it. We don’t blink — we expect — when movie characters can get into fistfights with dinosaurs, and it’s all because of the control that the computer brings to imaging. And movies are positively tame compared to the intensely-processed imagery of TV commercials and print ads.

I’ve become more convinced over time that Computer Graphics is Photography. And that both are forms of painting, which is an elaborate form of drawing. Cinematography (and video gaming) is to crossbreed drawing with theatre and music, introducing the explicit use of time. Titian is said to have declared “all art is one” — and Garry Winogrand was reputed to have said to Joel Meyerowitz, when perusing a book of Titan at a NY bookstore: “Hey, look, another great photographer!”

Within this grandly-broad definition of art, then, so wide as to include XBox, fingerpaints, and oboes, there seems to be a fairly-consistent distinction between the notions of “color” and “line” (in music, one might call it the distinction between tone and melody). And while some might attack me for this notion, I always feel that of the two, line is superior. Our eyes, and our minds, just work that way. Line is the story, the melody, the shape, the edge. You can like a record, but sometimes you’ve got to be able to dance to it.

Studio shooting on set is in color, because color is usefully descriptive to show us our favorite stars. We expect it. But the lighting and staging is deliberately made to augment and accentuate line — rim lights, backlight, TV cameras (and digital still cameras) with edge-enhancement hardware, fog on the stage and polarized light sources. These are all hacks borrowed from studio portrait photographers who borrowed liberally from the traditions of painters before them, as recent as Leighton and back to the Caravaggists if not before. The lighting guys on Shrek saythat they reviewed every shot on a black-and-white monitor, because as important as color styling was to the film, it was the line — the modeling of form by light and dark — that ultimately led to the success or failure of each shot’s lighting.

Motion itself is a kind of line too — like melody, it’s a line through time. In games and films it’s easier to let color into the picture without the danger that color’s emotional, sentimentalizing influences will trash what is essential in the image. And motion, like line, is inevitably stylized, even if only by the timing adjustments inherent in editing. So in films, in games, in animation, I feel comfortable with color. But in still work, it seems more an obstacle than a tool.

For me, a camera is a solitary sketchbook. Film cameras (so far) are the quicker in the hand, lighter, and more flexible and controllable in sketching at the B&W essence. The computer screen is a detailed, communal painting. Infinitely tweakable, thoughtful, textured. I feel priveleged to be comfortable working in both.