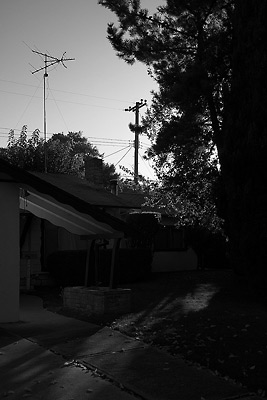 Terminator 3 seems to be one of those films that was years and years in the making — that is, years and years of negotiations over when, who, and how much they would all be paid. And as afterthoughts, maybe we’ll need a script. T3 is a film completely devoid of significant surprise, just a long parade of fairly stock action sequences, set against expensively comptetent but uninspired effects. I watched it first with the sound off, then as it repeated on our long transatlantic leg, I saw it again with the sound enabled, hoping it would somehow make more sense and improve. Nope.

I won’t go in depth into the many awkward gaffs and holes in the plot — most noticeably to me, how the protagonists casually walk into a supposedly-guarded military complex carrying heavy weapons, much less how they wander into a hardened, well-stocked military bomb shelter that’s both unguarded and abandoned (though filled with equipment that looks recently-used, and with a computerized security system). The “plot” was just a thin premise for lurching between More Of The Same set pieces, essentially a film built from commercials for the previous film.

One could say that Matrix Revolutions suffered from the same disease, and to a degree it probably did (the scenes with the Merovingian are an obvious example). And I really don’t think I can imagine a film that’s more full of itself than this third Matrix, even including the second one, which I usually refer to as Burning Man versus Microsoft Corporation.

The first problem, one shared by many sequels (2010 comes readily to mind), is that filmmakers (and audiences) often forget that films aren’t real. By that I mean, films are often constructed in a metaphoric way, that their environments and story elements are not reconstructions of some “real” circumstance, but they are instead deliberately shaped and stylized for the sake of making a point. When a sequel comes along, how are to deal with these distorted circumstances?

The first Matrix uses its environment to make metaphoric statements about society and an ordered existence — not the fantasy-world existence of the Matrix, but of our existence. When Neo sees past the illusory nature of his social context, he is free to be anything — the last “Superman” shot is there to emphasize and symbolize his newfound mental freedom.

For the sequels, they’re stuck trying to explain Superman. The key metaphysical point of the entire Matrix enterprise has already been made, and they have nothing more to say beyond it — instead, they’re left worrying about the mechanics, trying (with increasingly-expensive and silly effects) to make us believe in the “reality” of the Matrix, exactly opposite to the point of the first movie.

(Similarly, 2010 frets through similar metaphoric territory, trying to take the final “ultimate trip” sequence of 2001 at representational face value. What the heck was the director thinking?)

Once you have a story that’s perceived as magical, you can just forget about causality in the mind of the audience (indeed, discarding causality is essentially what magic’s all about). By the time we get to Revolutions, Neo’s robot hand signals aren’t just shutting down robots, he’s exploding them by the hundreds.

As a counterpoint to Terminator, United Air was also playing Charlie’s Angels: Full Throttle. No surprise that the director, “McG,” spent his days churning out MTV spots before the Angels movies — Full Throttle is just a chain of music-vid-like set pieces. The plot is even less substantive than in Terminator or Revolutions, but one dosen’t really expect the three Angels to be involved in any sort of drama or genuine predicament. The action is so over the top, TV commercial characterizations and candy cane sexuality, that there’s no need to worry about story. Just a loopy chain of explosions, car crashes, and musical numbers. Entertainingly harmless when watched on a TV or a 5-inch airline-seat screen, though I can easily imagine the experience being claustrophobic in a darkened theatre.

Full Throttle also has Bernie Mac, an actor whose screen persona so often seems to be out of control, though I suspect that in person he’s as measured and exacting in his work as a jeweler.

Bernie Mac deadpans his way beautifully through a supporting role in the winning movie of recent weeks, Bad Santa. There’s more genuine astonishment and entertainment value in the first three minutes of Bad Santa than in the previous three films combined.