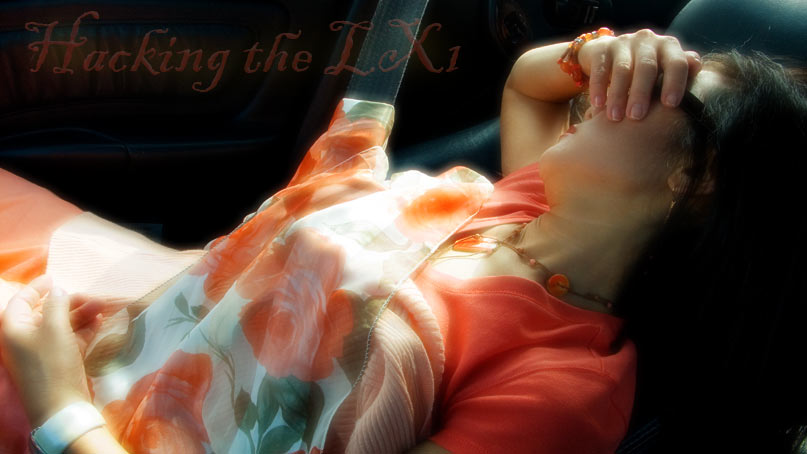 After some time using it daily, I can recognize my own way of working with the LX1, so it seems time to share some rambling notes. Operationally, electrically, and optically the camera is identical to the Leica D-Lux2 — these notes apply equally well to both cameras.

Let me start why saying why I bought the LX1. I knew that it would be slower to use than a DSLR, but I wanted a high-quality compact. A friend at work was raving about his DLux2, and I checked out the Panasonic alternative but wasn’t feeling a need to buy anything at the time. A couple of weeks later, I saw a very cool camera at Fry’s and realized that this was the same camera I’d been web-browsing. Besides the pleasant feel of the camera in my hand, it had an actually-wide wide-angle (28mm equivalent) and native 16::9 aspect ratio.

16::9 aspect exactly matches the format of newer widescreen movies and the Sony PSP, which I’d found to be an excellent venue for showing short video clips and lots of widescreen photos during the previous week’s Game Developer’s Conference (where I’d been toting my Canon SLR) (weird trivia — the camera itself is 16::9-shaped , which can be useful for thinking about composition even with the camera turned off (hold it up in front of you for a sec) — and the camera is almost exactly the same size as the PSP screen). I read all the reviews I could find, looked at photos made by it, and then bought it. I have been happy.

This is the first non-phone camera I’ve had without an optical viewfinder. I know that some folks have gone ahead and superglued a 28mm Voigtlander Minifinder to the top of their DLux2 — I understand it, that desire to raise the camera to your eye is a basic one. The camera is, after all, an extension of your eye…

Yet as much as I enjoy camera hacks, this seems overboard. I like the LCD, though it is not nearly as immediate as a eye-level finder. Responding quickly to what’s in front of the camera can be tricky — it takes time for your eye to shift back and forth from the scene and the finder LCD, racking your internal focus back and forth as you do it. It can be a sort of barrier, and I’ll mention how to help that further on. </a> I have gently hacked my own camera, using about $0.05 worth of gaffer tape (you knew I would get here eventually, right?). Gaffer tape can definitely help the LX1, even if you get the camera in the svelte and low-visibility pewter. The first illustration shows two key aspects of the camera that can be enhanced by a little of the old G.T.

At the back, there’s a triangle of black tape placed overlapping and below the little “grip nubs” that Panasonic has already provided for your thumb. The fabric of the tape is much better to grip, and it doesn’t shift around so much when you’re also trying to use your thumb on the controls. It’s an improvmenet for two-handed and one-handed operation — in fact the camera is almost too slippery for one-handed operation without this enhancement.

At the top, I’ve added a tiny strip of tape to the mode-select dial, laid in the blank space. It’s directly opposite the “P,” so when the camera is in “P” mode you can feel the line of tape squarely under your index finger. This makes it straightforward to set the camera not only to “P” mode but to any mode, once you’re used to the order of the neighboring symbols. With the tape, modes can be selected purely by touch — no looking at the dial or the LCD. This is invaluable for use in quick-paced or darkened situations. </a>The front of the camera can likewise use a little grip improvement — placing two narrow pieces of tape as shown here improves the purchase of your middle finger when gripping. The difference in finger-slippage is really dramatic, compared to the smooth plastic surface under the tape. Remember, the LX1 is a very light camera — it’s easy for it to shift around in your hand without a good grip (unlike big metal 35mm’s of old).

I got a great deal on a red Leica-badged Crumpler case, which is sturdy nylon/cordura and has a wee pouch in front for carrying an extra battery and/or SD card. It can be carried on a shoulder strap (it’s almost too light for that), on your belt, or the camera strap can stick out and you can just carry it as a “loose” case. The Crumpler is similar to the Lowepro Ridge 30, which is somewhat generic.

That work colleague whose DLux2 helped inspire me to buy my LX1, has one of Luigi Crscenzi’s luxurious LeicaTime cases, which like the Crumpler is a snug rectangle, but unlike the Crumpler is fashioned from heavy leather. Slightly less pragmatic-looking, lacking the same sorts of clips and mountaineering-inspired velcro bits, but beautifully made and the machine is well-protected.

Luigi also makes a “never-ready” style case, which you can see here — Panasonic likewise makes a slightly simpler one for about $30, along with their own pouch models.

I’m glad I got the Crumpler — of all the cases I’ve seen it seems the most durable and useful.

The LX1 has a lens cap. This can potentially make it less-than-pocketable, compared to cameras that fully retract their lenses. I’ve yet to have trouble with this. A danger, when pocketing the camera sans case, is that the cap will come loose in your pocket and the lens will be scratched. A solution I used before receiving my Crumpler — keep the pocketed camera in a plastic ziploc sandwich bag, which keeps everything snug and doesn’t let fabric or loose pens catch on the cap.

The lens is the star of the camera, I’m really impressed with its lack of distortion and crisp results even wide-open. Pictures speak to its color and sharpness. It’s only f/2.8 but the addition of “OIS” Image Stabilization gives it hand-holdability at pretty low speeds.

I leave my OIS in “Mode 1” (always on). The “Mode 2” (on just when you press the shutter) slows the camera down. Mode 2 supposedly saves battery life, but a second battery is trivial to carry. I’ve rarely needed it, even after a full day of snapping.

(It’s been pointed out to me that Mode 2, though it does add shutter lag, is sometimes more stable than Mode 1, since Mode 2 always starts from the center “zero” position)

The controls are cramped. That’s what happens when a device is tiny. The grip tape helps a lot, though occasionally I accidentally press the self-timer button (the < arrow) at inopportune moments. Likewise, when reaching for the AF/AE lock button, it’s easy to accidentally press the joystick (which jumps you to the “quick menu” — invaluable when you need it, but camera-stopping when you don’t). Practice is the only thing that can really help here.

At least one user on Galbraith’s has complained that the AE/AF lock button is disabled when the camera is in manual mode. They want it to act like Canon’s CF4 custom function. Happily, in practice this is a non-issue.

The reason it’s a non-issue is because unlike most any other compact digital I’ve seen, the MF mode is set by a slider on the side of the lens — much like the AF selector on an EOS lens, but much easier to manage. Not a push button that resets when the camera is switched to another mode, nor a (yuck) menu item. It’s physical, and it stays where you put it.

So if you’re shooting in manual exposure, it’s easy to just ignore the AF/AE-L button, and instead let the camera focus in AF and then flip the slider to MF, which effectively functions as an AF lock (with manual override, unlike the “regular” AF lock). It’s easy to use by feel which is a big deal to me. I want to be looking at the scene, looking at the picture — not busying my eyes reading menus and other on-screen junk (and that includes looking for the little AF/AE indicator). The more you can know about the camera’s state without looking at it, the better. Let your eye look for pictures, not mode indicators.

The manual focus has another rare feature for a compact — a depth of field indicator, indicated as a yellow band against the white range guide. Keen.

Using MF, the camera is very fast to respond to the shutter button. All good. Manual exposure, easy zone focus thanks to the DoF markers, fast shutter & 28mm view — my kind of camera.

The flash is low-powered and uses a preflash, like Canon et al. I’ve rarely used it. There’s no connection provided for controlling external strobes. This hasn’t had much effect on my shooting either.

A lot of web-review trumpeting has been made about sensor noise at the higher ISOs in this camera, and return trumpets have sounded about how great <a href”http://www.picturecode.com/”>Noise Ninja</a> is at correcting for the noise. Both contentions are true. I like using RAW mode and correcting noise problems later, I have a good workflow set up for this.

A feature of the camera is that when in RAW mode, a full size JPEG is stored — some folks have complained about this using too much space on the card (hey, extra 2GB cards are… what, $50-60 these days?). I like it. The JPEG serves as a good reminder of what you actually intended. I like that I can set the color process to B&W or sepia and the JPEG is stored using that setting, while the RAW file is… well, RAW, and contains all the original color information.

Beats me why the camera only supports USB 1.1 output. Ooops. I use an external USB 2.0 card reader, which is much, much faster.

I’ve finally become a convert to Adobe DNG — it makes life simpler for people with multiple cameras to keep all the files in the same format. So the LX1 RAW files, the CRWs from the G5 or the DSLR, all can live together in peace. My digital workflow goes:

and from there to Photoshop and an archive disk. I keep some LX1-dedicated Photoshop actions around, particularly one that labels pix with LX1-related flickr tags and copyrights, and another that can take 16::9 photos and ready-format them for the PSP.

Here are some links to people I’ve found using the LX1: