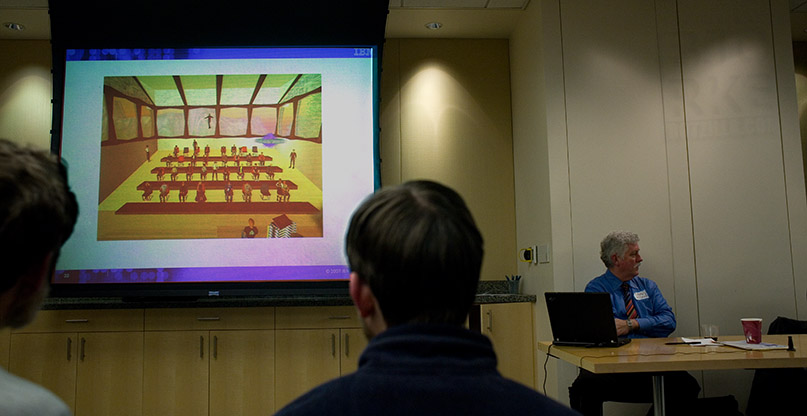 Besides working on GPU Gems III (the quality of the submissions just keeps rising with each successive edition! Far more fantastic work than we even can squeeze into one large book... choosing the most-appropriate from so many good choices is tough); prepping for the upcoming Game Developers Conference in San Francisco; creating proposals and abstracts for conferences in the months after that; working on developer tools and ongoing work in helping 3D artists expand their abilities to create great-looking GPU-savvy games... I'm also busy dealing with lots of MMO and Virtual-World developers and researchers.

I guess it was my inevitable destiny: the origins of the name for this very site, Botzilla, come from the now-slumbering BotBot program, designed to create customized avatar scripts for the mid-90's virtual world The Palace.

It would certainly be useful to have a second me around, mostly to do errands while the FirstMe was busy with... well, you know, stuff.

Stuff like keeping track of the household, making sure people get fed, homework completed, DVDs and library books returned, Tivo watched, pictures occasionally taken or printed, books read, scuba gear used, friends acknowledged and seen, or keeping up with my RSS feeds, which I set up in theory to make it easier to keep up with blog pages and the like. Unless I'm insanely diligent they just keep falling behind, behind, behind... all the labor-saving technology is a powerful mechanism for giving me too much to do. Rather than being thrilled that, say, Alec Soth has posted 58 entries over the past month or so, entries I know I will enjoy reading should I get the chance, I just end up feeling guilty that I haven't had the chance for a settled time to read them :/

And then there are the games... I'm still lingering in the late second act of Final Fantasy XII, interupted by two weeks of computer-less and console-less holiday break, and looking in the immediate future my hope of playing any of my existing consolers gets increasingly slim under the encroaching shadows of Wii and PS3 or any of the many great PC titles that are stacking up next to "Lolo," my game-and-itunes machine.

Just the same: if you do wander into SecondLife, give an IM holler to "Shashinka Komparu" or just seek out (and join!) the "NVIDIOTS" group.

(Or if you play EVE: drop me a line either here or via eve-mail to "Fenris Chow" — our corporation is likely to open for recruitment again in the near future)

Yes, that's my method as well: hit the 'keep new' tag. Sadly, I've often found that I will never go back to those links! I have the same problem with links I post on del.icio.us, with my browser favorites, even with the stacks of unopened envelopes that accumulate on one end of my dinner table. I think "hey, that looks interesting" and I tag it but DON'T ACTUALLY READ IT. I *know* that "sorted" doesn't equal "read," but that's what happens.

I've come to recognize that I have five slightly-overlapping different feedreader themes, any ONE of which would keep me busy most days: