When I was a teenager my mom bought me the standard-for-the-time poster of Farrah Fawcett, to pin up on the wall of my room. Maybe she just thought it was in fashion, or was worried I might not know what a girl was. Not for me to say. It seemed okay, but nothing about the Charlies Angels really worked for me anyway.

At about the same time I was babysitting for a family across the street. The father was a photographer, and once their kids were asleep I could look at his photo books. Thanks to him I picked through every last volume of the Time Life Library of Photography. Somewhere in those pages I ran across the photo above: Avedon's Duchess of Alba. Seeing it still brings me back to Kent Kobersteen's family room, where I first saw it. 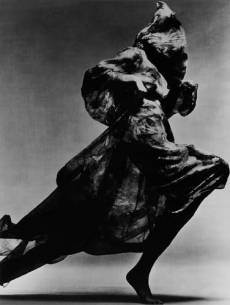 I was flumoxed. She was not of this world, separate and existing only there in the photo. I recall thinking that this was less a person and more some sort of chess piece. From them on, whenever I would babysit that volume would be one of the first ones to be viewed.

In reality, the Duchess, unlike most people, was not the sort of person likely to be swayed by photography's easy likeness. Her rank meant that she was just as likely to be painted for some number of state representations anyway, just as had previous Duchesses of Alba — most famouly by Goya. And while Avedon's portrait made her face a familiar image to many Americans, it probably had very little effect on her already considerable social standing.

Unlike most famous people, the Duchess of Alba was not a celebrity. She was already celebrated without photography.

There were some other images in that row of black and gray photo books. I still remember a fantastic dress, I think shot by Penn, with billowing scalloped sleeves. Or other Avedon standards, like a leaping Jean Shrimpton. 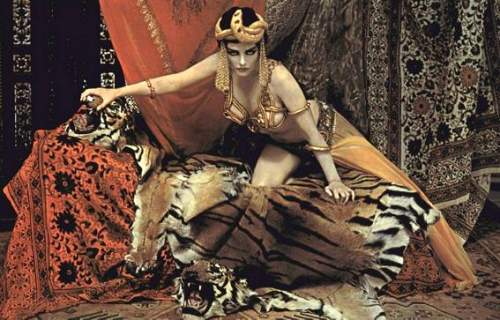 Another Avedon series that has resonated through my memory, this time from Life's weekly pages in my parent's living room rather than Life's books, was one that I never would have recognized as his work (I only discovered its origins many years later). Involving Marilyn Monroe disguised as various fim stars of earlier years, it was all in color and even now I can still recall seeing her impersonation of Theda Bara, staring out of the page through heavy eye makeup. Seeing that series led, I think, to my first realizations about deliberate photographic color styling. 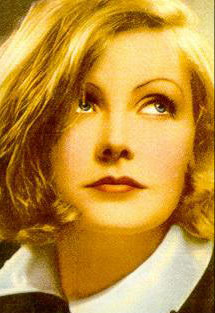 While I didn't fall for Farrah at the same time as my fascination with a thirty-year-old photo of a distant Spanish woman, I soon discovered Garbo, even more removed across time, an even-more futile object of photographic desire. She was by then a very old and reclusively-invisible woman. Heck, she might have been dead already. I wasn't interested in any of that.

I went to the library and pored through books of Hurrell & Bull. Rode the bus across Minneapolis to the Uptown Theatre to see revivals of Ninotchka and Camille. Anything to see My Girl Greta.

(BTW, I'd be keen to know more about the photo here. The costume is from Queen Christina, probably from the same photo session as the image seen on the joint U.S./Sweden Greta Garbo stamp of a decade ago (that one is more somber, and the hair fully covers her eye). Anyone with a pointer to its source? I've only found this hand-colored variation on the web.) 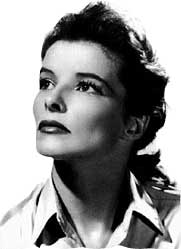 By the time I approached college I had another old-movie crush on the side, but was also starting to recognize the curious effects of celebrity photography in a more abstract way. I recall think of how one late night, when I'd stayed up to watch Anna Christie, thinking about the power of mathematical models, of how a complex matrix of voltages and patterns of colored dots could give rise to an image that still invoked emotional attachment.

More than a simple emotional attachment, it's certainly true that my desire at that age to be a photographer (specifically, a fashion photographer) was driven to a great degree by a desire to somehow push past the glossy page, to somehow inhabit the world of those photos. And likewise my growing interest in films and filmmaking, which eventually dragged me far from the Uptown. Along the way I started learning about more than just the arresting faces. I grew familiar with the names of the unseen people behind the pictures: Avedon, Penn, Billy Wilder; and down through the range of media specialties, Kevin Aucoin or Gordon Willis or Yoko Kanno and more. The mystery dissipated somewhat to be replaced by a different sort of fascination that's stayed with me to the present.

And the impossible has retained its appeal through the world. People have asked me (or opined to me) about Aki, our heroine in Final Fantasy. We made some pinups of her, one of them graced the cover of a Maxim special issue. Why was she there, some people wondered? No guy could really want Aki, she didn't exist. How could we compare her, say, to Jessica Alba, who also appeared in that same issue? Jessica Alba was a valid object of desire, she was flesh and blood.

But by that time I already knew better. Jessica Alba, like Aki — like Greta, like Uma, like Hep, like Gwyneth — is an image. The flesh and blood portion is tiny compared to the image held in the mind of (millions of) viewers — and the differences in likelihood between ever actually touching the fictional Aki and the semi-fictional Alba are vanishingly small.