''
As If You Cared
My Story

Maybe the web will never work as a narrative form. Maybe the most one can ever hope from it is the flavor of narrative meaning, not the substance; or does that, in fact, bring it closer to the way we really live — not along a cleanly-crafted through-line, but wading through a morass of distractions? The web pushes you away at every turn, every path crisscrossed with interuptions and tangential links that may or may not ever bring the unwary viewer to the goal desired by theweb author.

But which has more to do with your real life, the TV movie or the scattered commercials?

Just the same, this is my bio page — and you, gentle reader, expect a brief narrative. Very well, then... 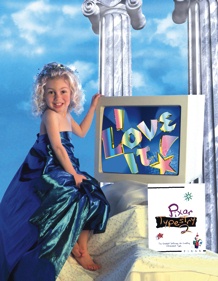 Diane Arbus once pointed out that while still photography and movies use essentially the same methods, in terms of film and lenses and so forth, we have a pair of opposed implicit assumptions about them: we assume that the motion picture is generally contrived, while the photograph is generally real. When we see a couple in bed in a film, we know that at the end of the day each goes back to their own home. Yet we accept still photos, no matter how outrageous, as testimony of unstaged reality.

As a practitioner of both forms, this distinction has great personal resonance. Animation in particular is the most "false" of all film forms, where characters exist only as pen strokes or pixels; where rabbits wisecrack and starships glide. Yet I became involved in filmmaking because of photography; some of my first film jobs were as production photographer and location scout.

Even production photography has a greater credibility than the movies — when we see a publicity still, it's presented with the names of the actors, not the characters they play — the photo exists in a more objective reality than the story depicted.

These two poles move progressively further apart for me as time passes. My photos become plainer, and less fictionalized, as my animation work becomes freer, less constrained. I wobble here at the locus of their mutual orbits.